The move, which allows the Chinese equivalent of N95 masks to be imported and used by health care workers, is designed to alleviate desperate shortages of personal protective equipment. 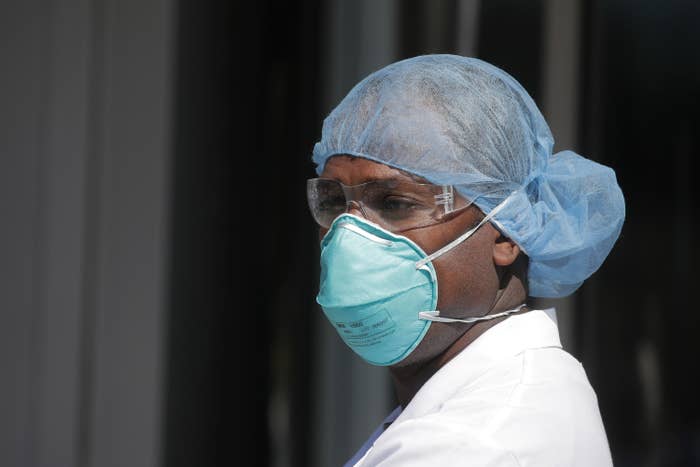 The Food and Drug Administration said Friday that it would formally authorize the use of KN95 masks by health care workers fighting coronavirus, a shift in policy on the Chinese-made masks prompted by the urgent need for protective equipment.

The announcement marks a significant reversal. Last week, the FDA had excluded the devices from a list of foreign-certified masks it said could be used as acceptable substitutes for the highly sought-after N95 respirator mask.

The change follows reports by BuzzFeed News about widespread uncertainty regarding KN95 masks, which appear to be far more available than N95 masks and have been recommended by the Centers for Disease Control and Prevention as a “suitable alternative” to their American counterparts. Across the country, doctors, nurses, and other health care workers say they are desperately short of masks and other protective equipment, putting them at risk of infection as they treat patients flooding into hospitals with symptoms of COVID-19.

"This is a big deal, this should unlock an incredible amount of inventory to get to the front lines,” said Peter Pham, a tech investor who has helped raise over $5 million to deliver masks and other personal protective equipment to health care workers.

If you're someone who is seeing the impact of the coronavirus firsthand, we’d like to hear from you. Reach out to us via one of our tip line channels.

Under a new emergency use authorization, the FDA said that the KN95 devices, which are similar to scarce N95 masks, could be imported into the country and are “eligible for authorization.” It stopped short of giving blanket approval for all of the KN95 respirators — which are certified under Chinese rather than US health standards — noting that it would only approve use of those that meet certain criteria, “including evidence demonstrating that the respirator is authentic.”

As of Friday, the FDA said that it had so far authorized one specific model of KN95 mask, manufactured by BYD Precision Manufacture Co. The Shenzen-based company, best known as a maker of lithium batteries as well as electric cars and bicycles, announced last month plans to open the “world’s largest face mask manufacturing plant,” capable of producing 5 million masks a day.

But the nation’s dire shortage of personal protective equipment appears to have overridden such concerns. The Department of Health and Human Services said last month that the US would require an estimated 3.5 billion N95 masks to combat the pandemic, and on-hand inventories represent only a tiny fraction of that. In a recent survey, nearly 90% of mayors said their cities lacked sufficient supplies of masks to treat the epidemic.

Although Honeywell, 3M, and other manufacturers have signed contracts with federal agencies to produce huge volumes of respirators, those masks could take months to arrive. In the meantime, desperate doctors and nurses have been forced to clean and reuse respirators or even fashion jury-rigged masks from bandanas or strips of cloth.

The shortage has created a chaotic marketplace for N95 masks, with would-be importers competing against buyers in countries all around the world, driving prices as high as 12 times their normal retail cost.

In response to the crisis, On March 24, the FDA issued an emergency authorization allowing non–US-certified masks to enter the country and be used by medical personnel. But that policy omitted KN95 masks, which currently can be had for a fraction of the cost of their N95 equivalents. It later clarified its position saying that it would not block the importation of the Chinese respirators, but refused to authorize their use.

Although some hospitals and other entities had been accepting small quantities of KN95 masks that had been entering the country, many were refusing to do so because of fears about legal liability. By granting full authorization, the FDA should be alleviating those concerns thanks to new rules put out last month by the Department of Health and Human Services that shield users of authorized devices from all legal risk during the health emergency.